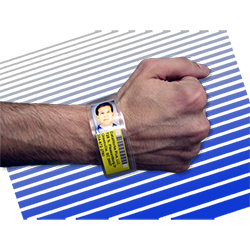 Bandworks is a flexible, high quality inmate wristband that can be customized for your facility. By integrating BadgeWorks with DataWorks Plus’ Digital PhotoManager, any record information captured during the booking process can be automatically printed into your agency’s custom wristband template. Wristbands can be used for inmate identification and tracking and can include data, images, or even barcodes. BandWorks wristband templates can display any combination of text, mudshot images, color-coded classification, or barcodes. 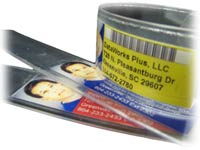 Durability: The wristbands are designed to stand up to the most adverse conditions and have a tensile strength of 8,000-10,000 psi to protect against stretching and tearing. This means they are nearly impossible for inmates to remove on their own, and the wristbands themselves will show signs of tampering if the inmate tries especially hard. In most cases, inmates can wear their wristband for up to two years before it will need to be replaced. This can result in a cost savings for your agency over traditional thin plastic or paper wristbands that need to be replaced often. It also reduces the opportunity for inmates to trade wristbands since they cannot be easily removed.

Integration with Inmate Tracking: The BandWorks system integrates easily and effectively with DataWorks Plus's Inmate Tracking system. The Inmate Tracking system uses barcode scanners which are used to scan the unique barcodes on each inmate’s wristband. This allows your facility to monitor and regulate inmates’ movements around a facility via barcode scanners. The barcodes can also reflect an inmate’s risk level, health issues, or even “separate and apart” data. Any relevant information regarding the inmate is immediately displayed to the staff. 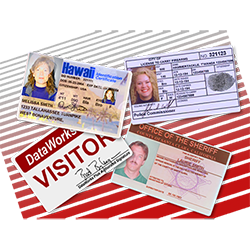 BadgeWorks is a customizable photo identification card and badge system used for identification and access control for secure facilities that supports magnetic stripe, laminate, bar codes, smart chips, and proximity cards. BadgeWorks can be used as a stand-alone solution or as a module to Digital PhotoManager to print data and images from the system onto ID Cards.

The BadgeWorks system can store all data for the ID cards in a database for easy retrieval. This allows for quick and easy card updates or replacement. Cards can simply be re-printed from the system, with no need to re-enter any data or re-capture any images.

BadgeWorks ID cards can be one-sided or two-sided, “contact” or “contact-less” smart cards, proximity cards, magnetic stripe cards, specialty cards, or plain cards. Information and graphics such as barcodes, signatures, logos, high-resolution digital photographs, text, holographic patterns/watermarks, fingerprints (biometrics), and more can be included on the cards’ layout, which is customizable according to your agency’s specific needs.

The DataWorks Plus Inmate Tracking system is a fully integrated tracking system with unlimited tracking locations so that you can know the location of an inmate at any given time. It offers instant inmate identification, streamlines headcounts, and can interface to other jail, criminal history, and RMS systems. Your system can be customized and also integrated with booking, JMS or other existing systems to eliminate duplicate data entry. Inmate Tracking increases staff and inmate security by enabling you to know an inmate's location instantly.

The Inmate Tracking System will track the location, inmate number, date, in/out, reason code, and location of each inmate within a facility. Records can be tagged with special information or warnings such as separate and apart, medical information, and high risk to help staff manage inmates safely and efficiently. Inmate Tracking includes a management console that displays the location of inmates in real time along with any associated images and data. Tracking history can be viewed and searched to see who was moved where and when. Customized reports can also be created for use in the system for onscreen viewing or printing. Statistics on inmate movement and population can also be viewed and printed, which is helpful when requesting funding that is dependent upon accurate headcounts.

Contact us now to speak with a respresentative
about our indentification and tracking options.